Posted at 16:55h in Geosynthetics by colonial Geogrid is a geosynthetic product used for stabilization and reinforcement in Civil Construction.

Geogrids are classified as a type of geosynthetic because it is an engineered textile manufactured from polypropylene polymers.

However, geogrid differs from many of the other geosynthetics because it is less of a fabric and more of a plastic structured netting.

Geogrid is manufactured through extrusion. The extrusion process is very different than the way geotextile fabrics are weaved. The resulting product is optimized for vertical or lateral applications. This direction of strength determines the classification.

At Colonial, we supply both biaxial and uniaxial geogrids. Although there are a number of Civil Construction applications for uniaxial geogrid, we find that most of our customers need a geosynthetic solution for subgrade stabilization.

When it comes to poor subgrade, we will recommend biaxial geogrid nine times out of ten.

To understand why we recommend biaxial geogrids for so many construction projects, we’re going to explain some important facts including:

A Quick Lesson on Geogrid’s History

Geosynthetics have stabilized roads and soil for more than 4,500 years.

In fact, one of the first examples we have of using geosynthetics for subgrade support is the construction of the monumental Egyptian pyramids. Excavations of ancient Egyptian sites revealed the use of man-made mats woven from grass and linen.

In the days of the Pharaohs, these natural fiber mats stabilized haul roads during roadway construction.

The natural fibers rooted into the native soil and created a support system that improved road stability. Using geosynthetics allowed the Egyptians to haul heavy building materials across sandy soils and paved the way for the development of geogrid and geotextiles.

Then in the late 1950s, Dr. Brian Mercer invented a process that revolutionized the synthetic fabric industry.

This forever changes how nets, fences, packaging products and grids are produced.

Geogrid is born and the Civil Construction industry is forever changed.

Overtime, geosynthetic manufacturers tweak and perfect the process to adjust the strength of geogrid.

The direction of strength determines the classification of grid as either uniaxial or biaxial. Strength also determines the best application for each respective grid.

Even though we now use grid for subgrade stabilization, the first geogrids were used for tie back applications like retaining walls. Nowadays, you would select a uniaxial geogrid for vertical applications such as tie backs for MSE wall construction.

Uniaxial geogrid has strength in one direction.

Some common applications for these grids include:

These geogrids are a cost-effective solution for subgrade stabilization because they stabilize soft ground through compaction over the entire surface plane.

From here on we are going to concentrate only on biaxial geogrids for stabilization.

If you need further information about uniaxial geogrids our sales team will be happy to provide assistance.

In order to explain how biaxial geogrid improves the subgrade structure, we are going to define four important testing properties.

MD and XMD are the two methods for testing most geogrid properties.

MD stands for the Machine Direction that the polymer moves through while in the extruding machine.

XMD stands for Cross Machine Direction, which is perpendicular to the machine direction.

Because biaxial geogrid must support weight across the entire plane, it is important for it perform well in both the in-plane of axis and cross plane of axis. In other words, in both latitudinal and longitudinal directions.

Aperture is one of geogrid’s defining properties. The geogrid’s aperture is the opening size of its net-like voids.

The size of the aperture determines how introduced aggregates (soil, stone or sand) will interlock, strike through or slide through the voids in the geogrid.

Junction Efficiency is another important property. This property demonstrates how strong the geogrid is at the cross section of its ribs. This cross section is also known as the node.

Junction strength is tested by the GRI GG2 Test Method, which is an industry standard testing method. During the test, geogrid is pulled at its nodes to determine its ultimate tensile or breaking strength.

Minimum Rib Thickness is a distinguishing index property. This property tests for exactly what it sounds: the thickness of the geogrid’s ribs.

Although you can draw this general conclusion, there are many other factors to consider when selecting the best geogrid for your site. Anticipated load, the quality of the subgrade and the type of aggregate are all important considerations that will affect the geogrid’s performance.

Lastly, let’s look at Ultimate Tensile Strength. This property is tested according to ASTM-D6637 and determines the geogrids resistance to elongation when subjected to a load transfer.

From these test results, you can generally conclude that TLG-12 has a higher load capacity threshold than TLG-11 and thus can handle greater strain before the subgrade is compromised.

How does Biaxial Geogrid Stabilize the Subgrade?

Now let’s tie it all together.

If soil is too soft, it will bend and buckle when a heavy load is added. Geogrid stabilizes the soil by confining the compacted aggregate in its apertures. The apertures also allow aggregate to strike through the grid and interlock with the soils below. This increases the soil’s tension.

Native soil conditions and the type of aggregate on site are two extremely important considerations that can greatly affect geogrid’s ability to stabilize a roadway.

If the native soil is very fine or has a high moisture content, the site may experience “pumping.”

This means multiple soil types are mixing and weakening the soil’s Core Bearing Ratio (CBR). When there is poor soil tension, a load transfer displaces the surrounding weak soils to nearby subgrade, resulting in ruts and low points.

If your site is experiencing pumping, you may need more than geogrid to reinforce the subgrade.

Geogrid provides subgrade support when compacted with the correct aggregate but when very fine and moist soils slide through the grid’s apertures, bearing capacity and compaction may be compromised.

To solve this issue, install a nonwoven geotextile fabric below the geogrid.

The nonwoven fabric filters the soil fines and separates them from the geogrid and aggregate base. As a result, the subgrade is further compacted and hydrostatic pressure is reduced.

Choosing the right geogrid can be tricky

Geogrid is an integral product for Civil Construction and one that has evolved quite a bit over the years. As a result, there are a lot of options out there.

If you’re not sure what grid your site requires, let us help.

We’ll review the project plans or make a site visit to make sure you get the product you need. 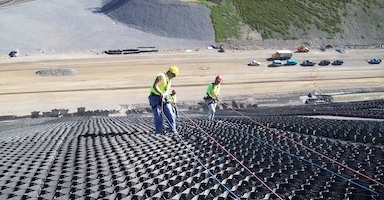 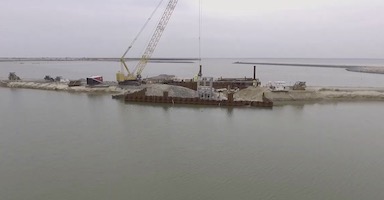 October 28, 2020
Before you can build a road or parking lot you have to start with a solid foundation. A stable foundation is especially important for green …
Read More