Posted at 11:00h in Erosion Control, Geosynthetics by colonial

An environmental restoration project in the Chesapeake Bay is bringing Poplar Island back to its natural state. Years of coastal erosion destroyed the small community and wiped out the island’s natural ecosystem.

Since the early 2000s, the island has been replenished with dredge spoils from the Port of Baltimore’s shipping lanes. A combination of coastal protection structures and geosynthetics secure and stabilize the vulnerable site that sits off the coast of Talbot County, Maryland. Years of collaboration from engineers, government agencies, environmental consultants, dredgers and contractors is paying off and bringing natural splendor back to the remote Chesapeake Bay island.

A Brief History of Poplar Island

Poplar Island is located in Talbot County, Maryland. The Chesapeake Bay island, once home to more than 100 people, had farms, a school and a church. Poplar Island even welcomed U.S. Presidents!

Years of severe erosion took a toll on the once 1,100-acre island. By the early 1990s, Poplar Island’s residents had fled and the island was reduced to a mere four acres.

Wind and wave erosion depleted Poplar Island of its land mass. As a result, birds, fish, insects and other coastal species lost their natural habitat. The island was all but destroyed, however, that isn’t where Poplar’s story ends.

The Maryland General Assembly, the U.S. Army Corps of Engineers, the Maryland Department of Transportation and the Port Administration formed a coalition to restore Poplar Island.

The goal was to turn this depleted island into a storage site for dredged material that would be used to restore the island’s natural habitat and cause no harm to the Poplar’s environment.

In 2001, the first dredged material arrived on Poplar Island. However, after several years of dredging and depositing, more storage was needed. In 2007 Congress approved an extension of the Poplar Island Expansion Project which permitted greater expansion of the island and the diversion dikes.

When the Poplar Island Expansion project is complete, the Chesapeake Bay island will contain an estimated 68 million cubic yards of dredged material. This material will create 1,715 acres of restored habitat which will be a combination of wetlands and upland.

Prior to the 2007 extension, multiple upland cells and wetland cells had already been created using dredged material from the Port of Baltimore. In 2016, construction of additional perimeter dikes, cells and spillways began.

A dike is a barrier that controls water levels. Dikes are a type of coastal protection structure that may occur naturally but are more typically man-made. The man-made dikes at Poplar Island hold back water while the cells are filled with dredge material.

These dikes were built using Geotextile Fabric and a tremendous amount of stone. Contractors sank pre-fabricated panels of High-Strength Geotextile Fabric to the bottom of the Chesapeake Bay using dredging boats and GPS.

Once the geotextile panels were in place, they added tons of stone. The High-Strength Geotextile fabric separates the stone from the sandy Chesapeake Bay floor and stabilizes the diversion dikes.

Once the dikes were built, the cells were filled with the dredged material. The dredged spoils are strategically drained and deposited throughout the cell systems.

The Army Corps of Engineers upgraded the spillway structures for Cells 7 and 9 in order to improve water quality. The new design features a system of box culverts with sluice gates. The gates control water flowing in and out of the Chesapeake Bay. Recycling and recharging the water within the wetland cells naturally improves the water quality of the Bay and further strengthens the entire ecosystem.

To start, the diversion dike was severed and sectioned off with heavy duty metal sheeting. While the system is under construction, the metal sheeting creates a secure work zone and keeps out water. A barge with construction supplies sits next to the temporary site and acts as a floating lay down yard.

In the middle of the site sits a series of box culverts. A box culvert is a pre-cast concrete box. Box culverts are used for a variety of construction applications including bridge underpasses, stream culverts and tunnels.

On Poplar Island, a series of box culverts serves as the passage way between the Chesapeake Bay and the wetland cell. The box culverts’ sluice gates open and close with the Bay’s tides.

We love projects like the Poplar Island Expansion that give us the opportunity to collaborate with different partners, engineers and contractors.

On this section of Poplar Island, we worked with Earth Retention Systems (ERS) and York Building Products to design and supply the box culvert-segmental wall block system. ERS provided the technical design for the system that the Army Corps of Engineers eventually approved. York Building Products supplied Magnum Stone which was the segmental wall block used for tidal structures.

Environmental Results in the Chesapeake Bay

Although the expansion is not yet complete, environmental research and restoration has been ongoing for many years. Poplar Island welcomes* students, researchers and the general public to witness the restoration progress. The Maryland Environmental Service has planted wetland marshes, released hundreds of terrapins, tagged monarch butterflies and tracked wildlife that are repopulating Poplar. You can stay up to date on their research and progress by subscribing to their newsletter. 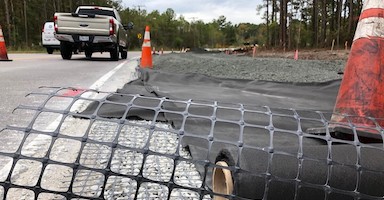 What is geogrid? Geogrid is a geosynthetic product used for stabilization and reinforcement in Civil… 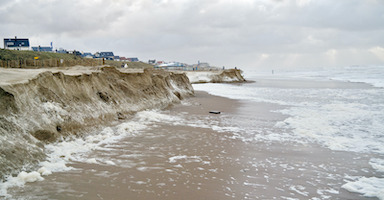 Coastal erosion is a constant battle for shore communities and oceanfront developers. Wind, waves and… 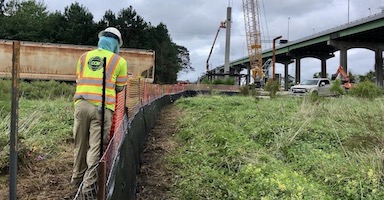 How to Select the Right Silt Fence For Your Site

Silt Fence fabric is a requirement for most construction sites in the Mid-Atlantic and Southeast….